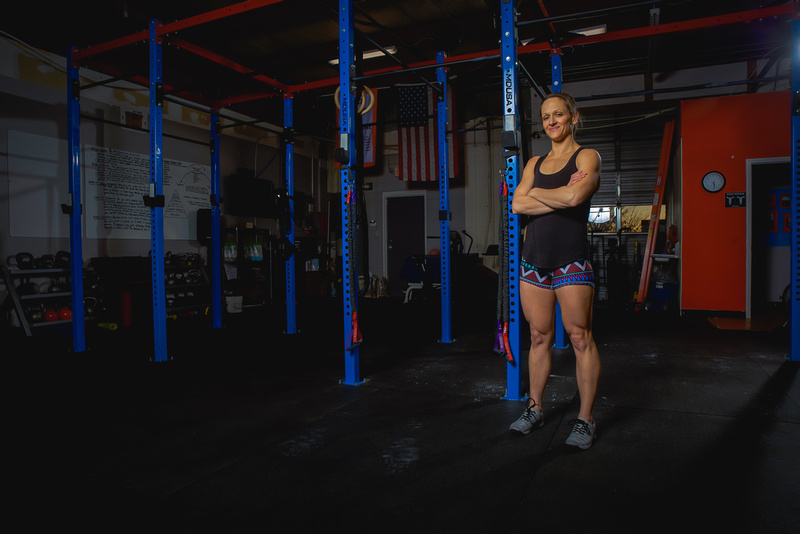 Today we are right back at it with inspiration athlete #2. I have been fortunate to shoot this athlete at local comp Superfit Games before however not an isolated session. When I reached out to Jaime of CFJ, I knew she would send me a perfect candidate. She definitely delivered. Sara Joy is currently a coach at CFJ and described as one of the hardest workers at Crossfit Jane. She has 4 children all under the age of 9 which is amazing in itself. She trains 5 days a week, coaches and also responsible for CFJ's management system of Wodify. She has also received her L2 and CFGymnastics certification.  She currently runs the Janesdottirs program for teen girls. Crossfit Jane's motto is "Building better versions of ourselves"". Sara is a perfect example of that and I was stoked to have her as a part of this project!!!! As you all know from my previous blog Sara was sent the same questions.... 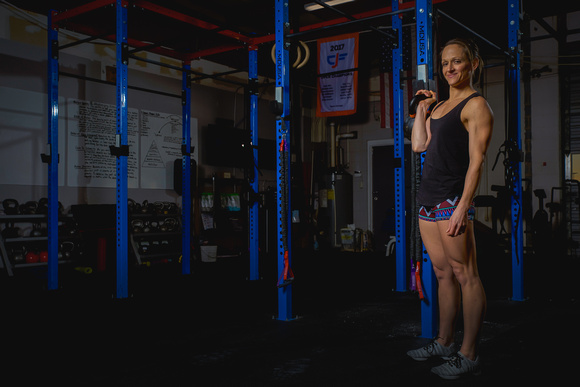 1. How long have you been doing Crossfit?
2. What brought you to Crossfit?
3. What do you enjoy the most about being at CFJ?
4. What would you tell others who are thinking about trying Crossfit?
5. What motivates you?

Sara's responses were so on point. Loved every single one of them!!  Check her responses out below:

1. How long have you been doing Crossfit?

I started CrossFit in 2009 in my mom's garage.  Back then, I didn't do any of the barbell movements, mostly wallballs, box jumps, kettlebell swings, running, rowing, double unders, burpees....all the really metcon-like movements. I didn't start true CrossFit with a barbell and gymnastics until I joined CrossFit Jane in May 2014.

2. What brought you to Crossfit?

When I started in 2009, it was in the garage gym my brother build with his friends.  I had just had my first child and was new to Charlotte.  After months of being really curious, I decided to have my brother show me what was going on.  I was hooked from my very first workout.  I continued this on and off for a few years while we continued to have two more children.  In 2014, my daughters pre-school teacher found out I did CrossFit and insisted I come do a workout at her CrossFit gym.  Ironically, her CrossFit gym was walkable to my house.  CrossFit Jane was still operating out of Jaime and Brent's garage and they were practically my neighbors.  I had no idea who there were and that CrossFit was happening right around the corner.  I gave in to the teachers request and joined her.  Again, once I met Jaime and Brent and completed their fundamentals program, I was hooked and I've never looked back.

3. What do you enjoy the most about being at CFJ?

The community!  There's no words to describe the community but it's amazing.  I've also made friends that have turned into family.  My brother eventually followed me from the garage gym to CFJ so it's been really special to grow closer to him while doing something I love.  My mom and brother's wife eventually joined so it's become a true family affair which is also so special.  Even though I am a coach, the coaching from the other coaches is also another great aspect of CFJ.

4. What would you tell others who are thinking about trying Crossfit?

Just give it a try.  Forget anything you've heard about CrossFit and don't wait until you think you are in shape to start.  Be open to all that you can learn about yourself through CrossFit.

Getting better....One of the phrases we use around CFJ a lot is "building better versions of ourselves".  This is what CFJ has become for me.  I want to become a better athlete, coach, friend, wife, mother, family member.  I have learned more than I care to admit about myself through the process of becoming an athlete and coach.  It has helped me to improve almost every area of my life.  I love the process of learning and growing and CrossFit has allowed me to do that.

After reading those responses you now see what I mean. Love that her entire family are now members of CFJ and the bond it has given them. As you read her response was very similar to the previous athlete in regards to " I NEED TO WAIT UNTIL I'M IN SHAPE" So for you athletes reading this and you hear someone give you that excuse... Please direct them to this blog!!!

I arrived at CFJ early as usual in order to get my strobes setup. I have only shot at CFJ once before and that was for the 2017 Crossfit Open. I was familiar with the setup of the box however I haven't used my new Einsteins here yet. To my surprise when I arrived Crossfit Jane looked completely different. There were bay doors and the ceiling was removed. Luckily it didnt change my approach but the new improvements were awesome!!!!  Sara and I chatted for a bit while I set up and it was like we were members of the same box. Another reason why this community is the best!!!! 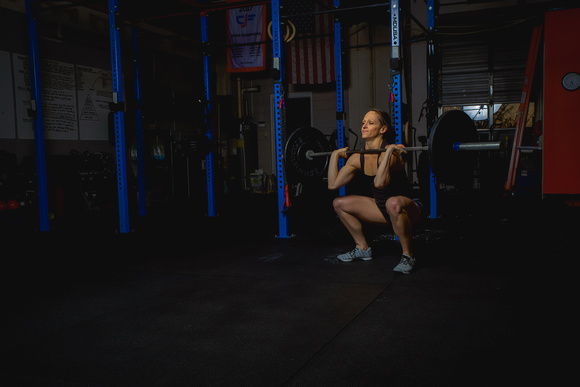 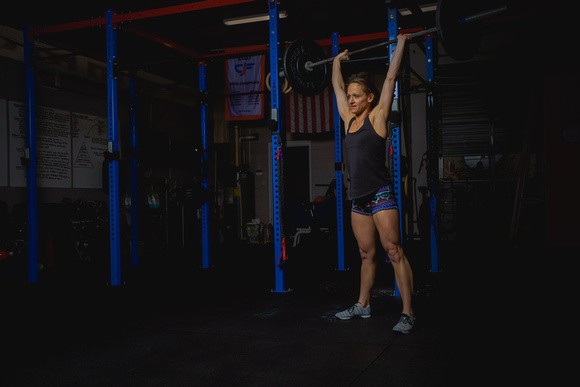 We started with some barbell movements. First up were Thrusters. Sara's form was so good that it didnt take many attempts at all to nail the shot. Watching the way Sara moved with the barbell it was only right to fall right into some cleans. Typically I will start out with just some pulls but I requested for Sara to just go for it..... GO FOR IT SHE DID!!! 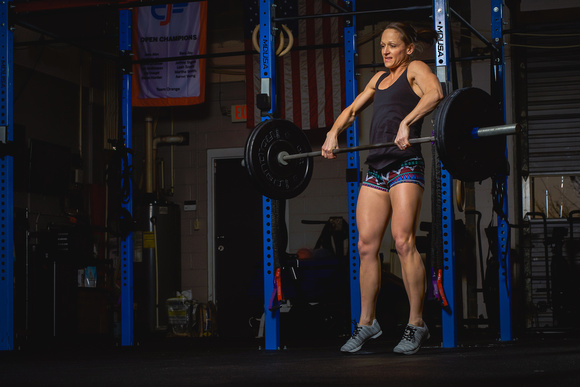 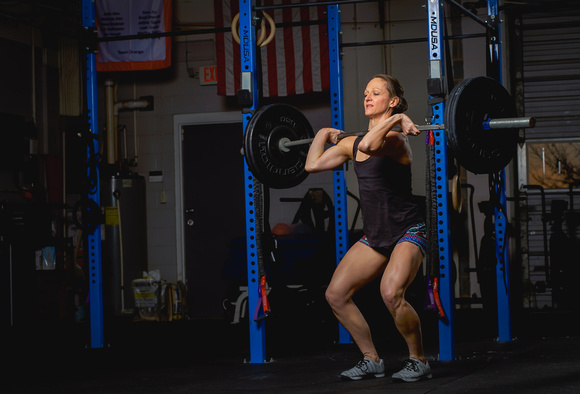 We then moved into some Wallballs. I noticed a large industrial ladder in the corner so I put it to use. Absolutely loved this angle. It did require some movement of my strobes but I think it worked out well. 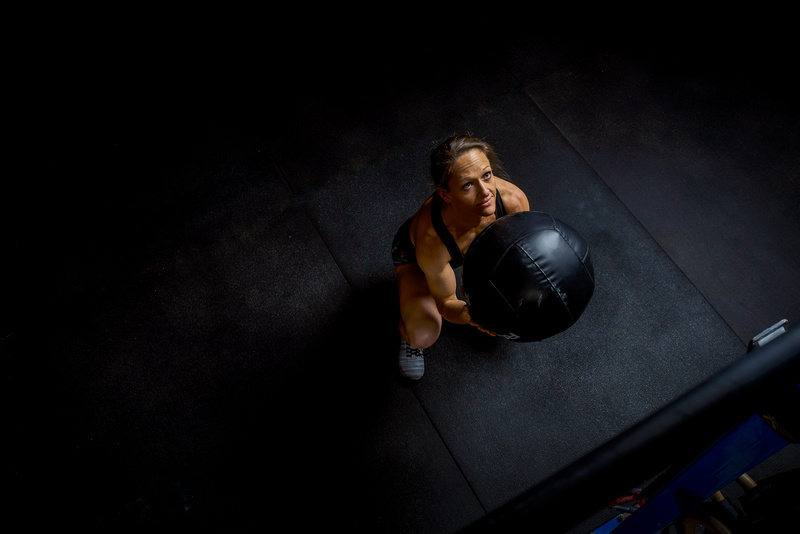 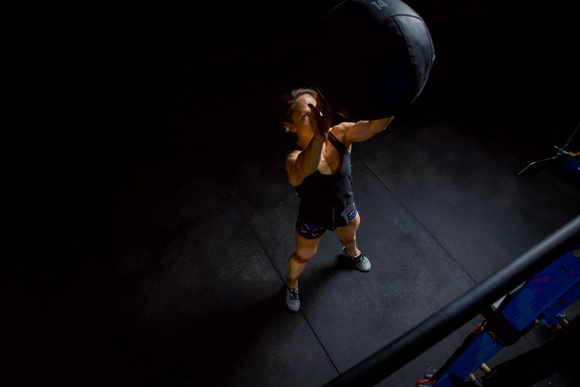 I wanted to give a different look and switched to my 70-200mm to capture Sara hitting some pullups. Nothing too fancy to the setup but very clean. Migrated over to the rower and some rope climbs. For this to be Sara's first shoot she nailed everything. 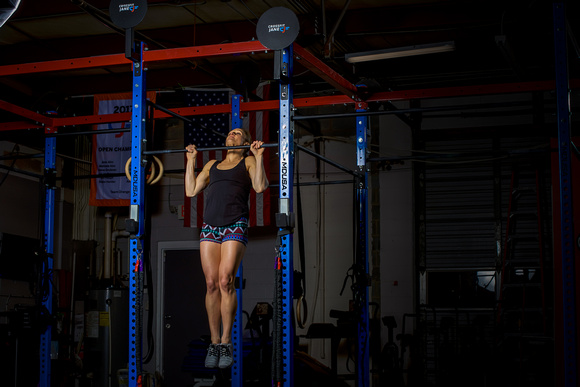 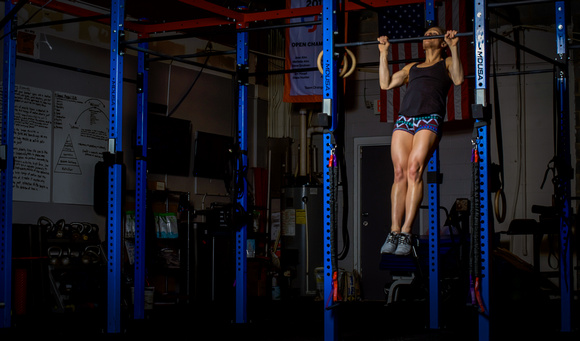 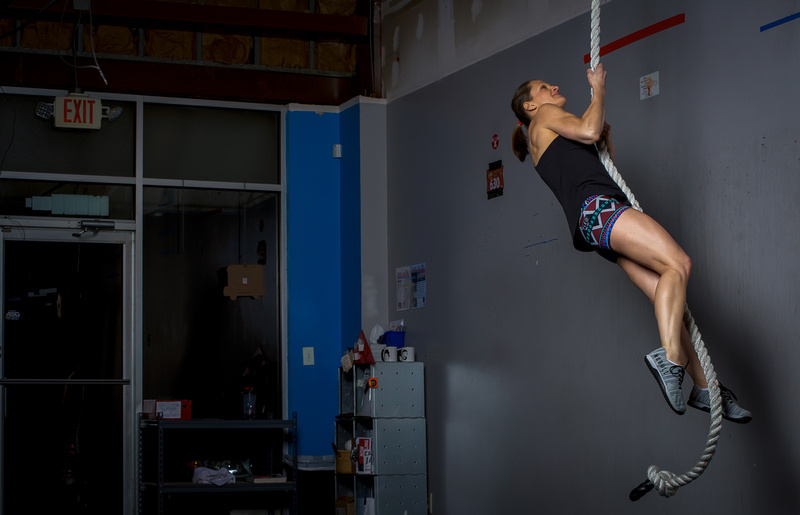 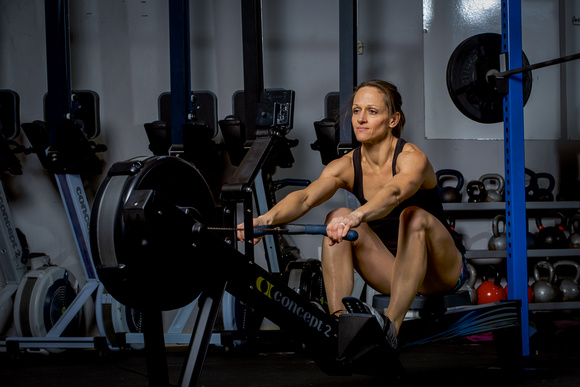 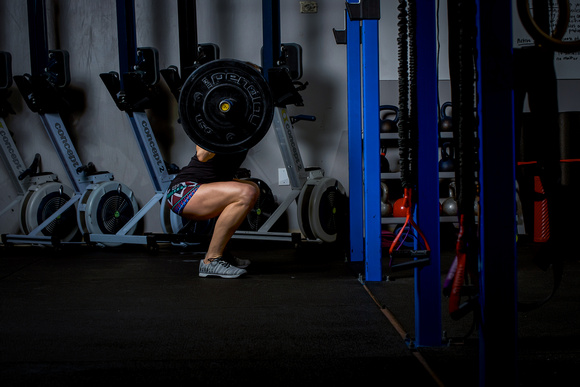 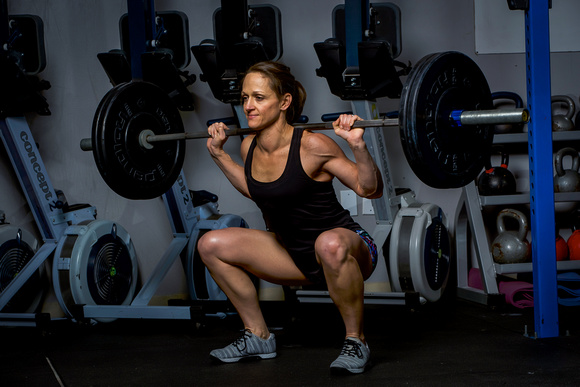 I knew that Sara loved bodyweight movements so we had to pull the boxes out!!! 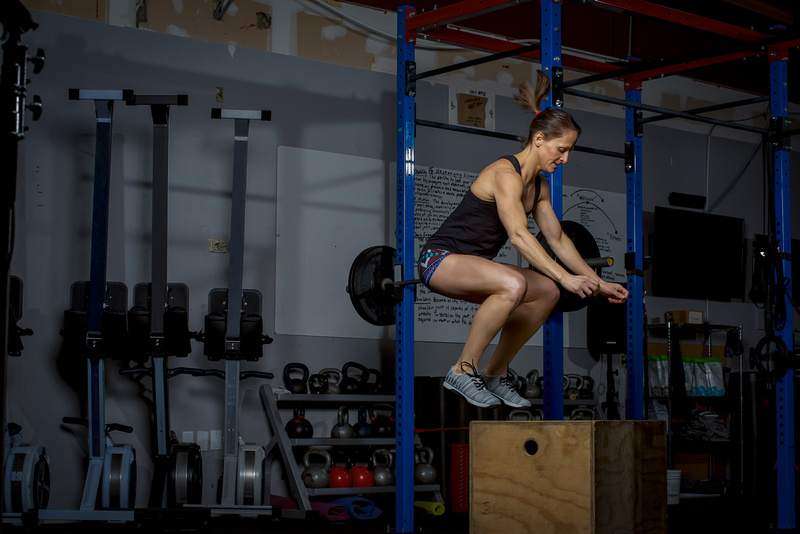 Threw a little chalk on the box for a different effect. Jamie.. DONT BE MAD.....HA.. I cleaned up... 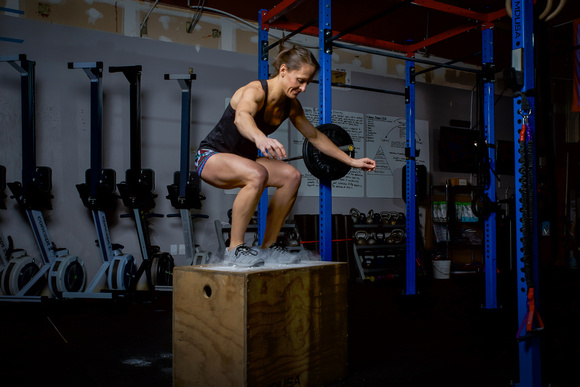 We wrapped it up with some dumbell work which included cleans, overhead squat. Then topped it off with 2 final body movements.... Burpees and Pistols!!! 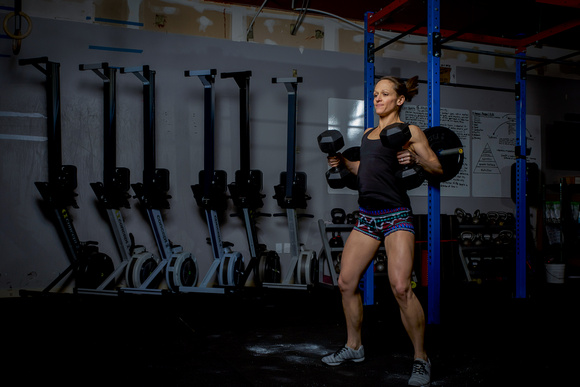 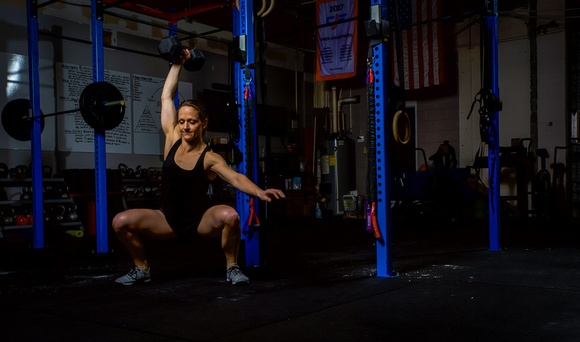 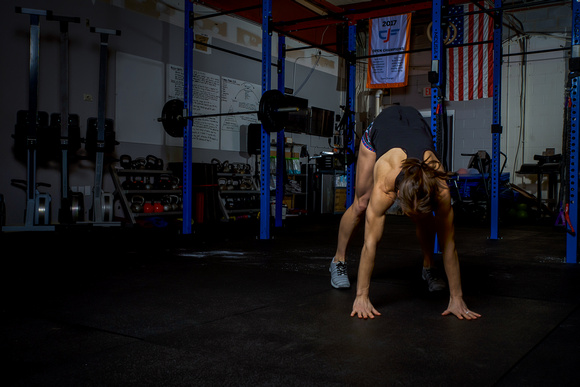 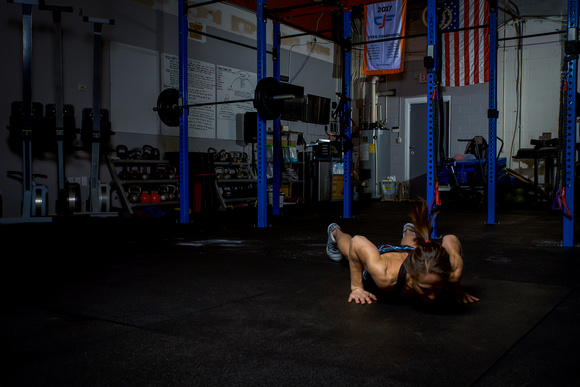 This project continues to be a success with the athletes i am working with. Chatting with Sara reminded me why athletes are drawn to Crossfit and the connection they make with their coaches. We had discussion about how your box becomes your family and truly changes lives. We spoke of members who have beaten cancer and how Crossfit creates an atmosphere that is full embrace and love.  Thank you Sara for sharing your story and for allowing me to be your first official photographer. Thanks to Jamie and Brent Smith for their support and allowing me to shoot in their facility. Appreciate my sticker swag and my new CFJ shirt. I will be sure to represent.  To my supporters who took the time to read about this experience.. THANK YOU.  Stay tuned for my next athlete who represents S3 Crossfit.