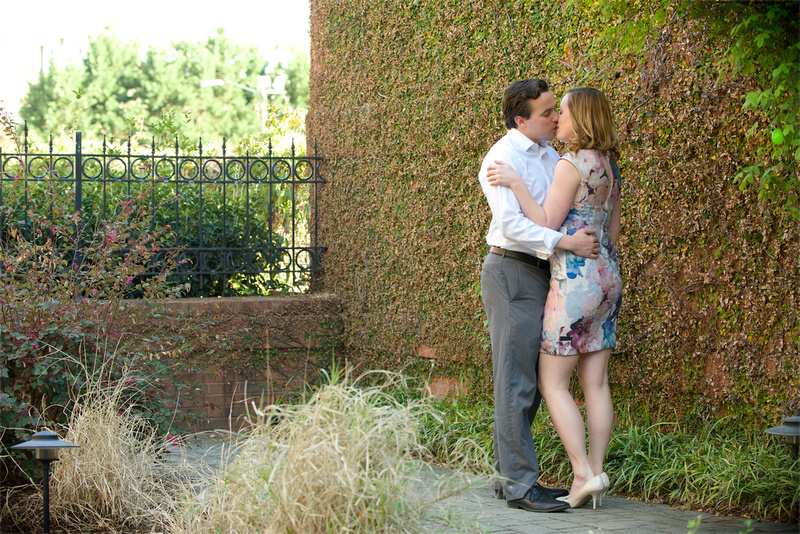 This was my first time doing a shoot in the middle of Uptown Charlotte and I must say it was a blast. While I was sitting and waiting at The Green Park there were about 3 other shoots going on. There was an engagement shoot, model shoot and a high school graduation shoot. It was nice to sit back and see others doing what they love to do. While I was waiting for Eric and Sarah to show up I started to pick locations of where I wanted to get some nice shots. The lighting was great and the weather was even better. When Eric and Sarah arrived hey were walking hand in hand and both smiling.. I knew right then this was going to be a great shoot.

After formally introducing myself and us casually talking about where we were from and how much we LOVE Charlotte. I then asked... "Is there any special occasion for the shoot"? Eric stated that is was a birthday surprise for Sarah. The story was that Eric presented Sarah with a frame and then 5 minutes before pulling to location told her they were having a photoshoot done. Yes.. pretty cool gift. They both were naturals in front of lens.

It was great to be in the mix of everyone walking around in Uptown and stopping to see this amazing couple get their photos taken. We even took photos in the middle of the street... Sarah words were "lets do it" so that we did. The shots came out great. These two were clearly in love which made it easy to capture them. I cant wait to present them with the full gallery and even more excited to see which photo Sarah chooses to put in her new frame!!!!!