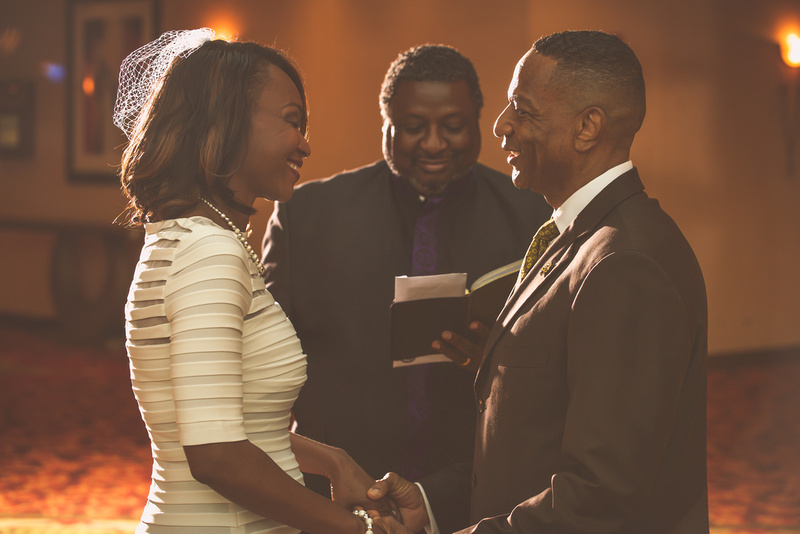 By seeing the title of this blog you can already get an idea of what took place. On my way to my session with Bruce Marko, I decided to check my email before walking into the box. I saw that there was a reply email from over a month ago. Simone had reached out to me previously looking for a quote for wedding ceremony coverage. I provided a quote and never heard back until this past Saturday, which was the day of the ceremony. Her email stated that her photographer cancelled on her and was unable to capture her day. While talking to her I could tell she was very down about the situation, which is understandable. I provided her the quote again and we were in agreement. From that point my 1 shoot day turned into 2.

After my morning session I had to get back home to charge up my gear...just in case. Since this was the day of, I literally had no idea of setup or how I intended on shooting this ceremony. One thing I learned after this, is to always be ready and have a basic game plan you can always go with. Tiffany joined me on this shoot to help out any way needed. Its always great having her with me for any shoot. Once I arrived to the hotel I walked in and saw the officiant, groom and bridesmaid. This was a small ceremony but the way I see it as long as you have the closest people in your life involved then GOAL ACCOMPLISHED. I was directed to where the ceremony would take place. There were large windows allowing a lot of light in, however it was very gloomy outside. I positioned my Alien Bees in the back right corner and attached my on camera flash for fill light. After I set up it wasn't long before the bride and groom were walking towards me. The ceremony started instantly. 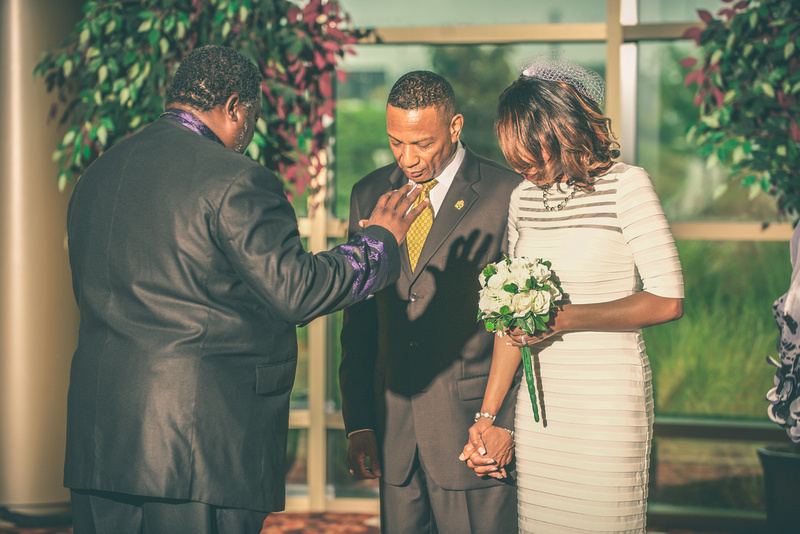 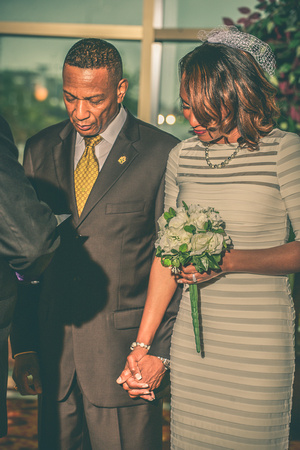 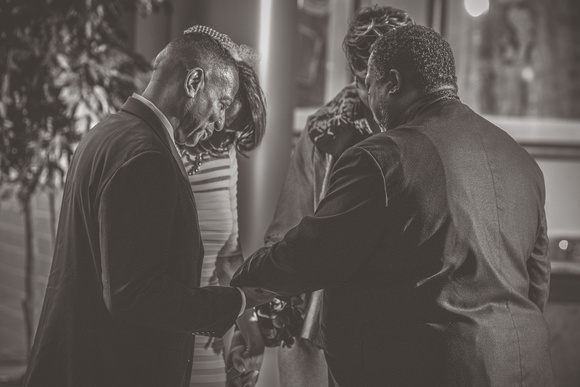 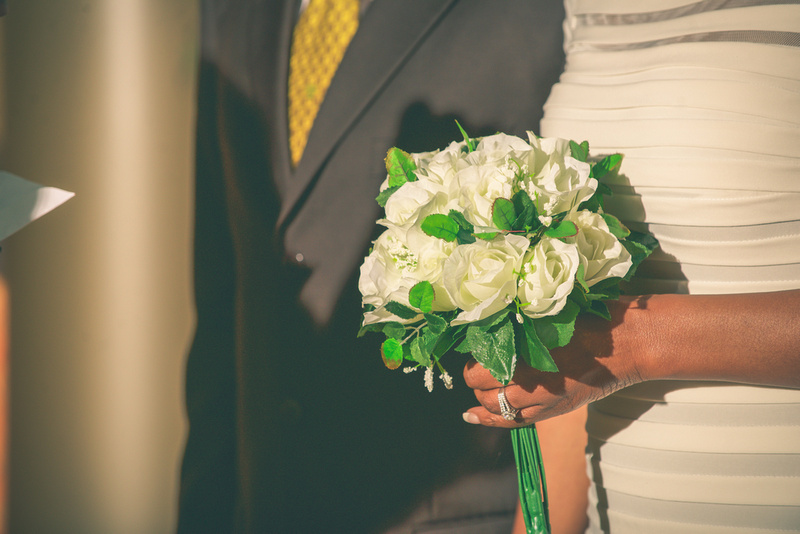 This was just a nice small and intimate ceremony. There was a prayer and vows and then they celebrated their union. 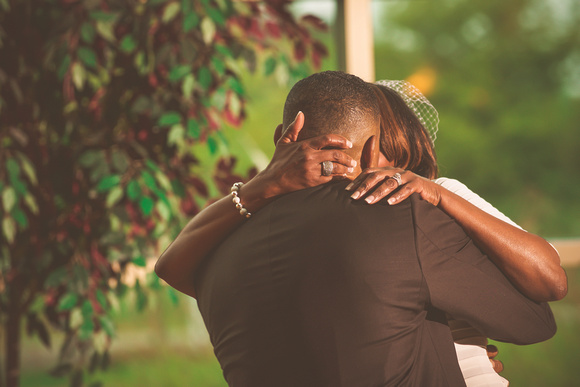 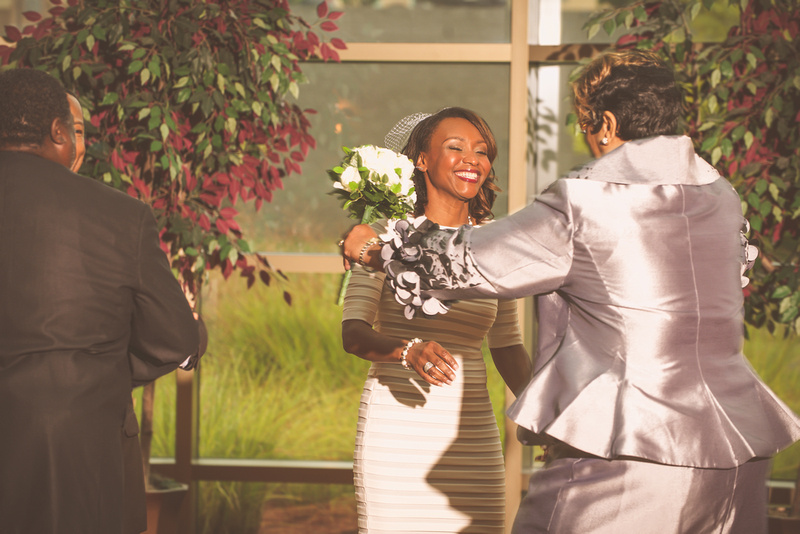 Once the ceremony was over we began the portraits. Since the weather was not cooperating we were limited to the inside. With this being a hotel there were not many spaces available to us. I used the trees, windows and stairs to my advantage as you will see in the images. First, I started with the bride and groom then followed by just the bride. 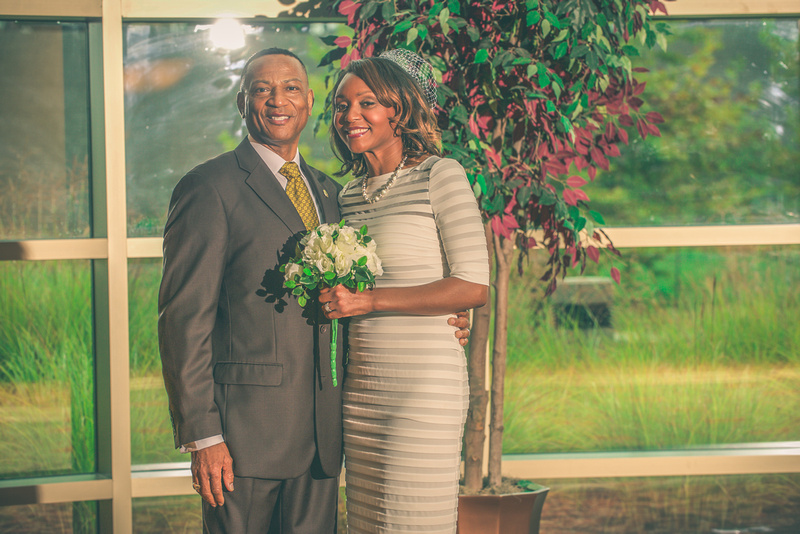 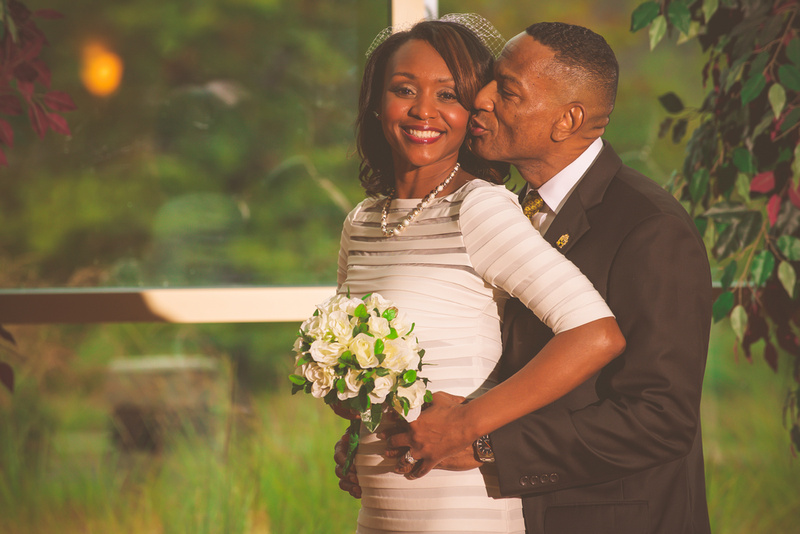 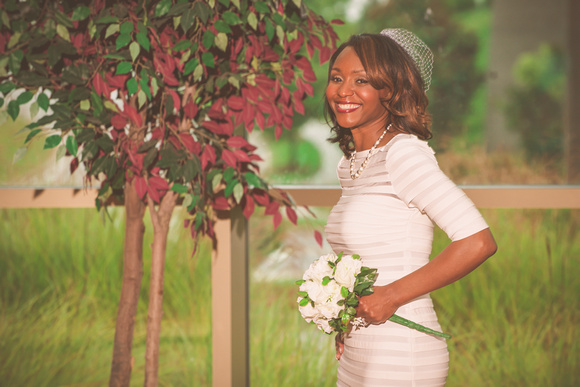 After the formal shots, Tim and Simone wanted to change into more casual attire for photos. This allowed me to switch out my lens and start shopping for other locations. I have shot at the hotel before, so I knew there was a large staircase at the entrance that would be great for photos. That's exactly where we started. We worked our way from the stairs back to the ceremony area. While walking and talking with the couple, it turns out they were from the Woodbridge,VA area also. Such a small world. Tim is currently active in the military and a 2 Star General. My first response was "Thank You so much for your Service" which was then followed by a "Thank You Bruce for your Support". I also thanked Simone for her service in the military as well. I shared that my mother worked at the Pentagon and my father worked for Core of Engineers. Tim instantly starting calling out people he knew. Honored to have met and worked with someone who defends our country. 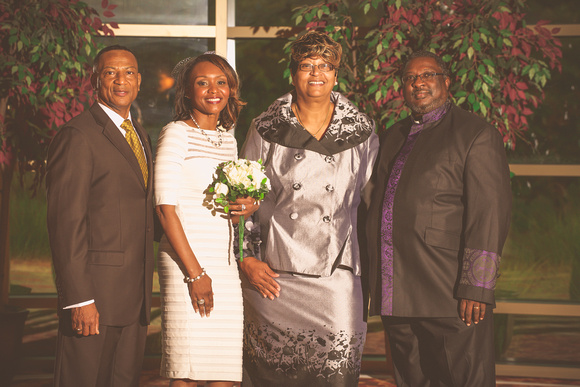 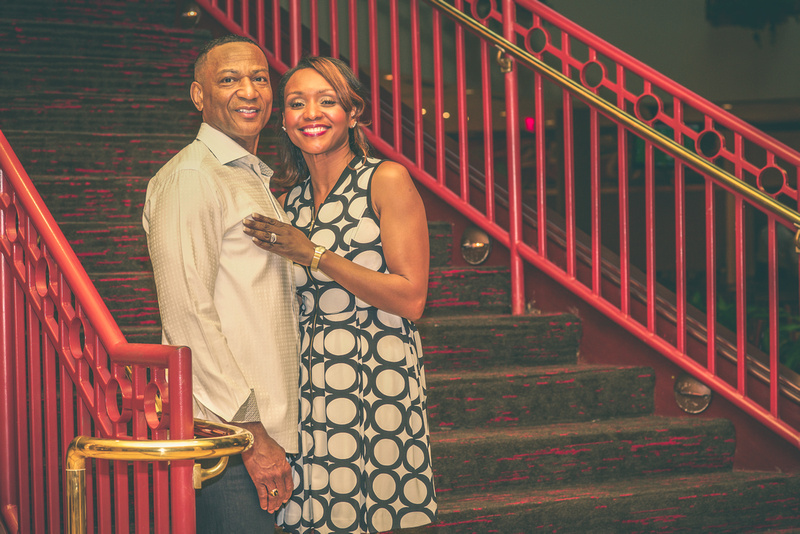 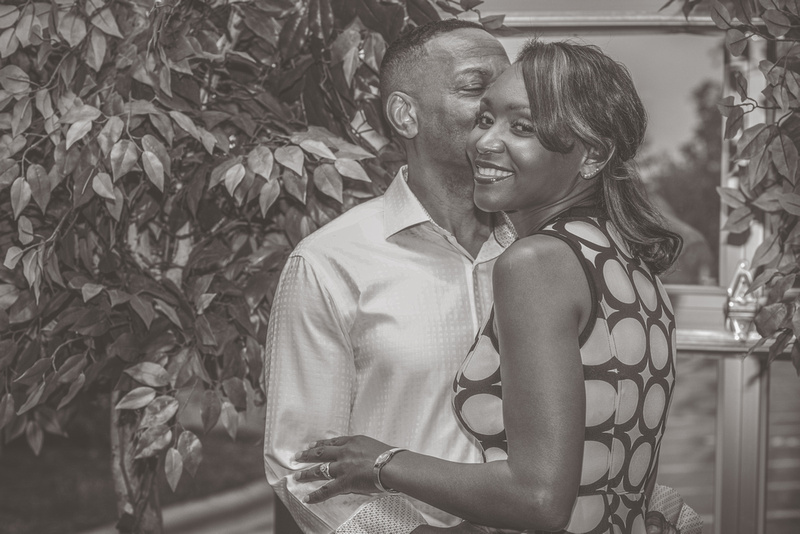 Tim and Simone were great to work with. Even if it was a last minute decision or due to a cancellation, I always say things happen for a reason. I'm glad I was available that afternoon for coverage and able to provide them with images they can hopefully cherish for a lifetime. Its always a great feeling to instantly click with people and conversation starts to flow. While I was finishing up their images we were having casual conversation which allowed me to capture them in their element, which was being together. I would like to thank Tim and Simone again for reaching out to me and allowing me to be a part of their special day. 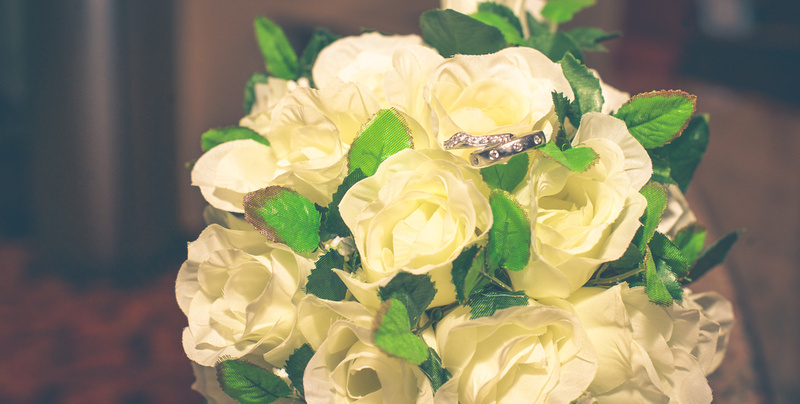 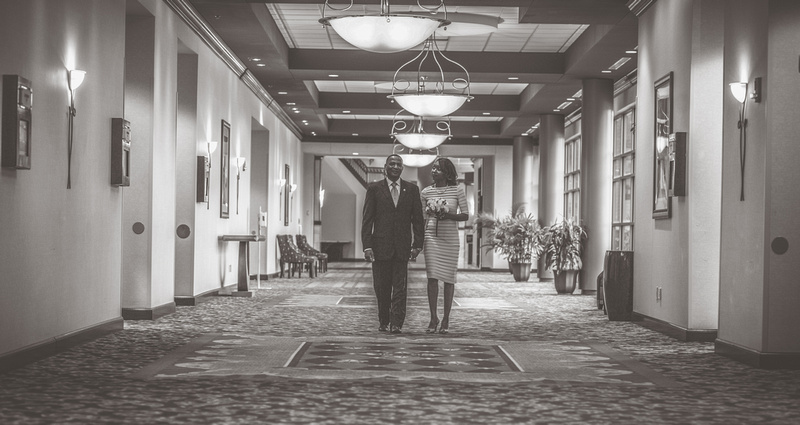 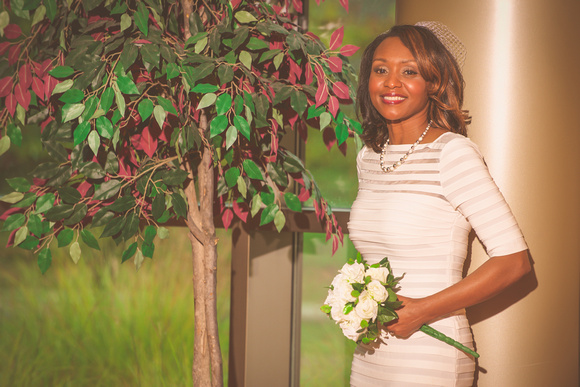 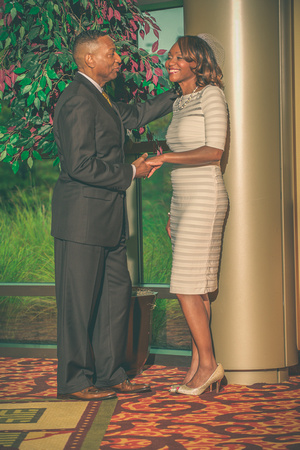